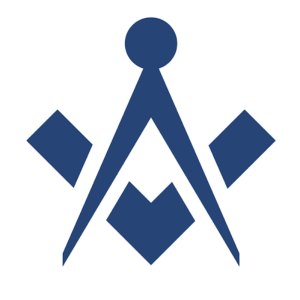 When the first Covid lockdown started in March 2020 and then during subsequent lockdowns Lodges have been unable to bid a proper and fitting farewell to members who have passed to the Grand Lodge Above. This was the case with the long time Treasurer and Charity Steward of Reserve Forces Lodge of Northumbria, WBro Lieutenant-Colonel George Adrian Watson PPSGD, who died on 8th November 2020.

During a short ceremony WBro Alasdair recounted how WBro George Watson had been initiated in Reserve Forces Lodge of Northumbria in November 1991, just a month before he had himself joined the Lodge and how that seniority had affected matters, with him following George up the ladder. He explained an occasion when the late WBro Alan Reece, as Master, had started to open the Lodge by wrongly saying to Alasdair ‘Bro Junior Watson’, then compounding his error in a flustered manner by addressing George as ‘Bro Senior Watson’. This had reached the ears of Province, so when the PGM attended the centenary meeting in April 1998 he had commented upon the unusual nature of the Lodge, having a junior and senior Watson, not Warden!

He reminded all how George had not enjoyed ritual, so when the time came for him to install Alasdair as his successor he had instead accepted orders to serve in Kosovo, which in 1999 was still a dangerous location. He illustrated George’s dry sense of humour, explaining how when Alasdair received his first Provincial rank as an Assistant Chaplain, whenever George thereafter wrote to him the envelope was addressed to ‘The Rev Major Watson’.

He pointed out how proud George was of having trained and served as a paratrooper medic, so being able to wear the para wings. George had presented to the Lodge a piece of regimental silver for the dining table in the form of a medic dressed ready for paratrooper duty.

The APGM then explained for Margaret’s benefit about the Festival system and how George had been responsible for ensuing our small Lodge had made a large financial contribution to each Festival, George leading by example as he had become a Grand Patron of the 2020 Festival, but sadly Covid had made it impossible to present him with that jewel before he died. This was the first occasion when members of the Lodge and Margaret had been able to meet together to remember him.

On behalf of the Province he then presented to George’s widow, Lieutenant-Colonel Margret Munro-Watson, the 2020 Grand Patron jewel, which she accepted with pride and gratitude.

Thanks go to W.Bro Alasdair Watson for the submission of this article.

If you have a story, event or news item you would like to have published on the Provincial website, or social media, please get in touch with our Communications Team at news@northumberlandmasons.org.uk